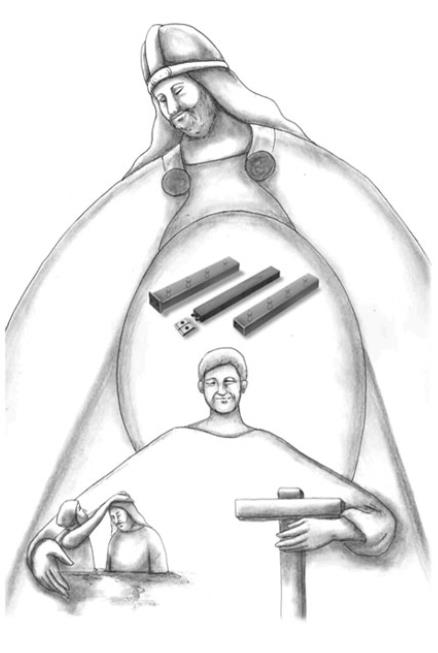 How Could We Believe in Jesus as Our Savior without Even Knowing the Gospel of the Water and the Spirit?

The Everlasting Grace of Salvation That Holds Us

Jesus Who Came by Water and Blood Has Saved Us Perfectly

What the Lord did when He came to this earth can be summarized by His birth, baptism, bloodshed, and resurrection. All these are His ministries of the remission of sin. Jesus has fulfilled His mission with His ministries of the blue, purple, and scarlet thread. The blue, purple, and scarlet thread manifested in the Tabernacle were for our own salvation from sin. God’s salvation is so elaborate that we should not believe in Him in our own way. We have to believe in His salvation as it is.
Our faith should correctly accord with the two truths of His salvation: His baptism and His blood on the Cross. That’s why the two tenons were correctly fit to the holes of the two silver sockets. We cannot regard the truth that Jesus has given us as just one of the knowledge of the world and believe it only as such. You and I are the ones who have been saved from sin before God by believing in Jesus’ works of salvation manifested in the two silver sockets.
The Tabernacle tells us of Jesus’ detailed method of salvation, and this salvation has actually been fulfilled for us already. Believe in the two gifts of salvation that God has given you. Gold that used in the Tabernacle implies faith. If you believe in the truth as it is, then salvation and the glory of the Lord can become yours, but not if you do not believe. Do you want to live inside the Tabernacle by faith, clothed in God’s glory and protected by Him, or do you want be cursed forever by continuing to not believe? If you believe only in the blood of the Cross, then you cannot be saved. You must believe that the blood of the Cross and baptism are one. The gift of the Lord is made of these two.
The Spirit of God dwells in our hearts only when we believe in both of these two elements (Jesus’ baptism and bloodshed). The Holy Spirit never dwells in the hearts of those who do not believe in them. If you confess your faith only with your lips but do not believe in your hearts, and if your knowledge is no more than a mere intellectual exercise, then you can never be saved. To be saved, you must first draw a clear line of demarcation setting the boundaries of your salvation: “Until now, I had not been saved. The salvation that I had believed in was not the real one. But by believing in Jesus who came by the water and the blood, I have now been saved.” People can become righteous only when they first become sinners at least once. They must admit that as the unsaved, they are bound to be condemned for their sins, and then become the perfectly saved ones by believing in the gospel of the water and the Spirit.
With the blue, purple and scarlet thread, the baptism and blood of Jesus, we must receive our perfect salvation. With His baptism and blood, the Lord has given us the gift of perfect salvation. To prevent us from believing based on our own thoughts, the Lord revealed this salvation in detail through the Tabernacle also. Because this salvation is so precious and perfect, it is worthy for everyone to believe. Do not believe in just a single aspect of His salvation, the blood of the Cross, but believe in both the baptism and blood of Jesus all at once! If there is anyone among us who has not been saved yet, then it is my sincere hope that he/she would be saved by believing, even now, in this truth.
Is there anyone who still believes in the blood of Jesus alone? There are so many Christians who still believe such a half-baked gospel. But my hope is that such a wrong faith will never invade any of our hearts again. No matter what happens, I cannot belong to a crowd of the unsaved. We are the ones who have been saved perfectly by believing in these two things (blue and scarlet thread)—that is, in the baptism and blood of Jesus. I thank God for these two gifts of salvation through which the Lord has saved me. Because God has fulfilled my salvation perfectly, I have already been freed from curses and judgment also.
Truly, our salvation that has come of the blue and scarlet thread is precious beyond all words. Remember and believe that your salvation is made perfect not just by the blood of the Cross, nor by only the baptism of Jesus, but by both the baptism and the blood of the Cross, and that it is by believing in these two that you can become God’s children. We have received eternal life by believing in the gospel Word of the water and the Spirit, the mystery hidden in the two tenons and the two silver sockets of the boards of the Tabernacle.
I give all my thanks to our Lord who has saved us from the sins of the world. Hallelujah!
Terms and Conditions Privacy Policy Cookie Declaration Contact Us