The Gate of the Court of the Tabernacle 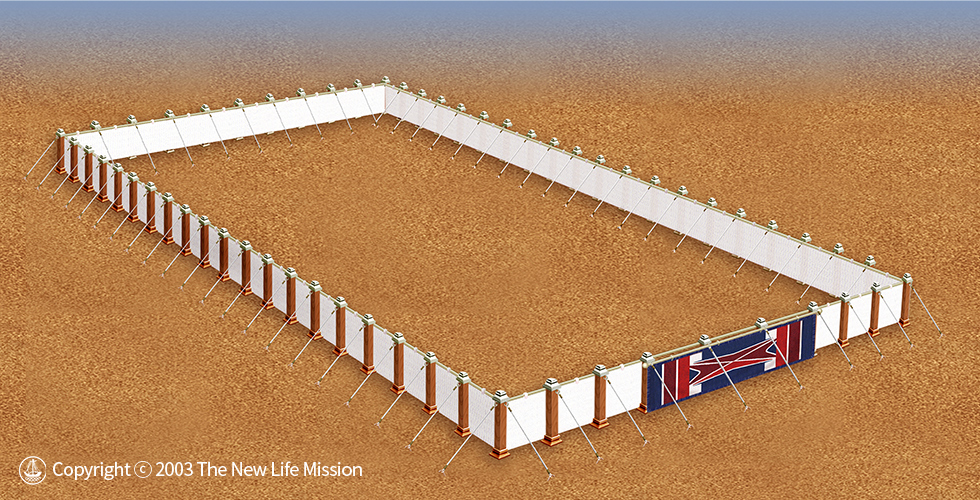 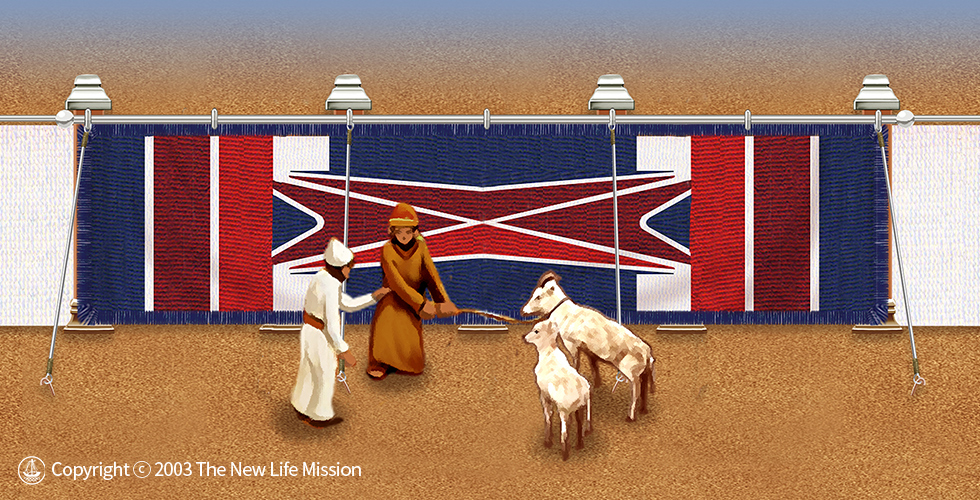 The materials used for the gate of the court of the Tabernacle were blue, purple, and scarlet thread and fine woven linen. The height of the gate was 2.25 m (7.4 feet), and its width was about 9 m (30 feet). It was a screen woven of blue, purple, and scarlet thread and fine woven linen, which was hung on four pillars. As such, whenever one tried to enter into the court of the Tabernacle, he/she could easily find its gate.
The materials of blue, purple, and scarlet thread and fine woven linen used for the gate of the Tabernacle manifest that God would save us from all our sins through the four works of His Son Jesus.
First, what does the blue thread show us? It shows us a part of the truth on Jesus, who became the actual Messiah of sinners, coming to this earth and taking upon the sins of the world by receiving His baptism from John. In fact, this baptism that Jesus received from John at the Jordan River is the truth of Jesus taking upon all the sins of the world once for all. Jesus actually bore all the sins of the world on His shoulder by being baptized by John the Baptist, the representative of all mankind. Because the sins of all human beings were thus passed onto Christ's own head, those who believe in this truth have no sin in their hearts.
Second, what is the actual meaning of the purple thread woven into the gate of the Tabernacle's court? It tells us that Jesus is the actual King of kings. Jesus, in fact, did make the universe, is the Creator Himself, not a creation, and is the actual Messiah who came to this earth. He, the Messiah, actually came to this earth already in the likeness of a human flesh. And by bearing all the sins of the world on His own body through the baptism that He received from John, and with His sacrificing death and resurrection, Jesus has saved all His people, who have recognized, feared, and believed in their Messiah, from all their sins and their judgment of sin.
Jesus is in fact our absolute God and absolute Messiah. He is the absolute Savior. Because Jesus took all our sins of the world upon Himself with His baptism, by bleeding and dying on the Cross and resurrecting from His death, He not only cleansed away all our sins, but He also received the vicarious judgment of sin in our place.
The scarlet thread, thirdly, refers to the blood that Jesus shed on the Cross, and its meaning is that Christ has given new life those of us who believe. This truth of the scarlet thread tells us that Jesus Christ not only received the judgment of our own sins by taking the sins of the world on Himself with His baptism received from John, but He also gave new life to believers by bestowing the life-giving faith to those who had died to sin. To those who believe in His baptism and the blood that He shed, Jesus has indeed given new life.
What, then, does the fine woven linen mean? It manifests that with the New Testament, God fulfilled His promise of salvation written in the Old Testament. And it tells us that when Jesus took all the sins of the world upon Himself with His baptism and was judged for our sins on the Cross in the New Testament, He fulfilled the salvation that God had promised to the Israelites and us with His Word of covenant.
Yahweh God said in Isaiah 1:18, "'Come now, and let us reason together,' Says the LORD, 'Though your sins are like scarlet, They shall be as white as snow; Though they are red like crimson, They shall be as wool.'" Also, the Old Testament's sacrificial system governing how the sacrifices are offered in the Tabernacle, under which the sins of the people of Israel were passed onto the sacrificial lamb with the laying of hands, was the promise that God made to the Israelites and us. This was God's revelation of the promise that He would save all the people of the world from their daily sins and yearly sins through the Lamb of God in the future.
This was also the sign of the promised Messiah to come. So in the New Testament's time, when Jesus Christ took all the sins of the world upon Himself all at once by receiving His baptism according to the way of the Old Testament, it was the accomplishment of God's covenant. Having given us all His Word of promise, God has shown us that He has actually fulfilled them all, exactly as He had promised. The baptism that Jesus received manifests this truth, that the God of covenant has fulfilled all His covenants.
Related sermons