The Ark of the Testimony 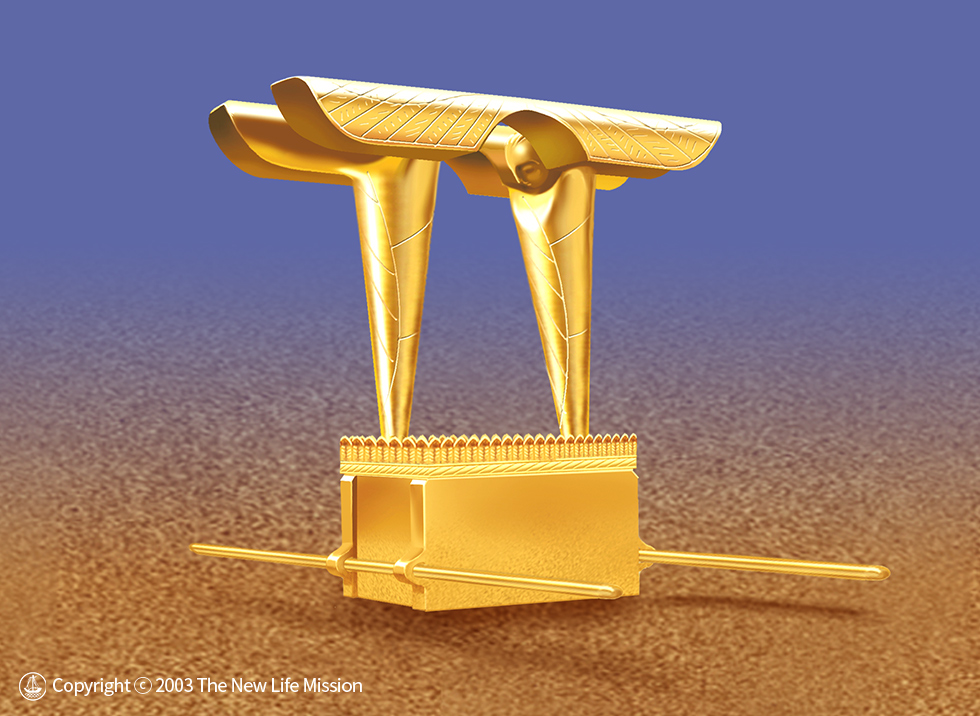 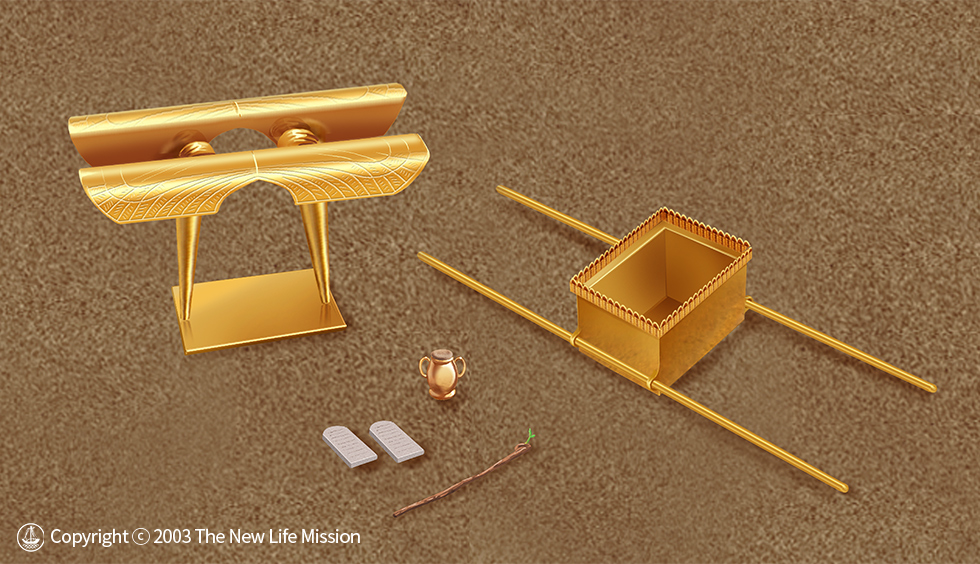 The Ark of the Testimony, measuring 113 cm (3.7 feet) in its length, 68 cm (2.2 feet) in its width, and 68 cm (2.2 feet) in its height, was made of acacia wood and overlaid with pure gold. Inside this Ark, there were two stone tablets engraved with the Ten Commandments and a golden pot of manna, and later, Aaron's budded rod was added to them.
The mercy seat, which was placed on the Ark, was made solely of pure gold. And on its both ends, cherubim were placed to stretch out their wings above, covering the lid of the Ark-that is, the mercy seat-and the cherubim faced toward the mercy seat. The mercy seat is where God bestows His grace on those who come out to Him by faith.
Four gold rings were placed on each corner of the Ark. Two gold rings were cast for each side, and poles were put through the rings so that the Ark could be carried. These poles were made of acacia wood and overlaid with gold. By putting the poles through the two rings on one side and the other two rings on the other side, God made sure that two people could lift and carry it. And our Lord said, "I will meet you on this mercy seat."
God made the Israelites to carry the Ark of Testimony along with the mercy seat by putting poles through the Ark. This means that God wants us to spread the gospel throughout the whole world. The same was true of the altar of incense-that is, rings were also placed on both its sides, poles were put through these rings, and two people were made to carry the altar.
Once a year, the High Priest took the blood of a sacrificial offering and entered into the Most Holy. He then sprinkled this blood of the sacrificial offering on the mercy seat for exactly seven times. God said that He would meet the Israelites on this mercy seat then. God meets whoever has the same faith as that of the High Priest, that is, the faith in His remission of sin revealed in the sacrificial system.
The blood of sacrifice sprinkled on the mercy seat shows God's just judgment of sin and His mercy on mankind. On the Day of Atonement, the tenth day of the seventh month, Aaron the High Priest laid his hands on a sacrificial offering to pass over all the yearly sins of the people of Israel. He then cut its throat to draw its blood, and then he took this blood inside the veil and sprinkled it on the mercy seat (Leviticus 16:11-16).
Through the blood that was thus sprinkled, God met the Israelites and gave them the blessing of the remission of sin. It was God's grace on the Israelites that He had established the sacrificial system. With the laying on of hands on the sacrificial animal and its blood, God had justly blotted out their sins and given them His mercy, the remission of their sins by grace.
Related sermons

· The Spiritual Mysteries Hidden in the Ark of the Testimony (Exodus 25:10-22)